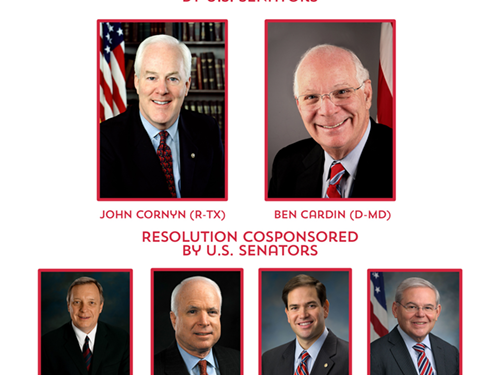 The United States and Mexico have long relied on a strong, strategic partnership in the areas of defense, national security, and trade.  The resolution outlines our shared cultural and economic ties and highlights areas of cooperation including votes at the United Nations; defense, security, and law enforcement partnerships such as the Merida Initiative; and efforts by the Nieto administration to reduce domestic production of illegal drugs and extradite criminals to the United States.  The resolution reaffirms this relationship by supporting continued diplomatic, economic, and security cooperation between the two countries and fostering a relationship that is based on mutual respect and the promotion of shared democratic values and principles.

“The United States and Mexico have long benefited from a symbiotic relationship in the areas of trade, defense, and national security,” said Sen. Cornyn. “It is vitally important, particularly for Texans, to ensure this strategic partnership is maintained by continuing to support economic and diplomatic cooperation between our two countries.”

“This bipartisan resolution is an important reaffirmation of the enduring partnership and friendship between the United States and Mexico. From diplomacy to security, immigration to trade, the United States is safer and stronger when we work together with Mexico,” said Sen. Cardin, Ranking Member of the Senate Foreign Relations Committee. “With over one million Americans living in Mexico and tens of millions of Mexican-Americans here in the U.S., our people share common values and unbreakable bonds that transcend politics.”

“Over the past few months, the United States’ relationship with Mexico has been in the spotlight for all of the wrong reasons.  But the fact is many of the challenges facing the United States cannot be effectively confronted, let alone solved, in a responsible way without cooperating and strategically planning with Mexico,” said Sen. Menendez,  Ranking Member of the Senate Foreign Relations Subcommittee on Western Hemisphere.  “As the U.S. and Mexico continue to be inextricably linked by geography, people, and shared economic and security interests, this bipartisan resolution reaffirms the importance that our two countries work towards strengthening our relationship, breaking down barriers and forging new areas of cooperation and growth.”

“The United States and Mexico share more than just a border—we have a deep and unbreakable bond rooted in mutual respect and a strong economic and political partnership,” said Sen. Durbin. “We must protect and strengthen this relationship to ensure that Mexico remains one of our closest allies and trading partners.”

“U.S. security and economic prosperity hinges on a strong relationship with our neighbor Mexico,” said Sen. McCain. “In my state of Arizona, over 100,000 jobs are directly dependent on trade with Mexico, and the free flow of goods and services across the border has contributed to unparalleled economic growth and development. We must do more to revitalize the spirit of partnership between our two countries and continue to strengthen our bilateral cooperation.”